When I get down to London I like to make the most of it and eat at some good places. Medlar has had some great reviews from bloggers and professional critics alike; it also won its first Michelin star in the latest guide [that was at time of writing in 2013, in 2014 it was demoted by Michelin]. A combination of these factors led me and 3 friends to sample the lunchtime offering on a crisp November Saturday.

Medlar is just at the more unfashionable end of the King’s Road and relatively inconspicuous in this area of flair and expense. The restaurant is light, airy and with only a handful of tables. Having afternoon commitments meant we were the first there, the empty shell lacking a little atmosphere before other diners arrived, they would have done well to pipe a little music in until it got busier. Some good quality bread arrived whilst we reviewed the day’s offerings; focaccia and sourdough were both nice but would not rival breads from other Michelin kitchens. One strong play from the Medlar lunch menu is the choice on offer, some lunch menus offer as little as two to choose between per course but here there were 6/7 on offer. I settled on a dish which has had its share of good reviews to date, Duck Egg Tart. The tart comes well presented with perfectly cooked oeuf atop perfectly cooked pastry. Alongside are rich irony duck hearts and a powerful sauce to pull all together, a dish that deserves its plaudits. Other dishes sampled by the party were equally good; a crab raviolo with a generous number of salty, yet sweet, brown shrimps and a scallop dish with fusion influence of black bean sauce.

For main course we came over all Autumnal, picking a number of hearty affairs. My selection was ox cheek. The meat had seemingly been cooking since the last time I was in the capital and fell apart if you so much as stared at it. It was served with quite traditional elements, a parsnip puree was good and a jus/gravy number worked well I just expected a little more. It seems I may have chosen poorly, fellow diners were pleased with ; beef&snails with a luxurious béarnaise, guinea fowl with girolles and potato pancakes and roast grouse with pate and damsons. The presentation here was a little less fine dining and didn’t quite meet the high standards that the starters had set out.

Before desserts we opted for an additional cheese course and there was a particularly good selection from a lunch menu. A trolley had a number of traditional favourites combined with some interesting selections, particularly good was a 36 month aged comté and a brillat savarin. It must be said that cheese is a £12 supplement if had as an additional course. We, somewhat cheekily, ordered one plate to share but there was plentiful for all so were impressed at the generosity of portion here. For dessert a chocolate pavé was a popular choice, the dish itself was lacking something though. Served with an ice cream and small amount of brittle it needed a texture and crunch to joust with the rich pavé. A crème brûlée was vast and interestingly shallower than I had seen one served before but was successful in delivering greater surface area of molten caramel. My choice was disparaged for being boring, a blackcurrant ice-cream with langue de chat (biscuit shaped like the tongue of a cat) but was a fine scoop indeed. It managed to be creamy and indulgent yet maintain the fresh flavours of the fruit. 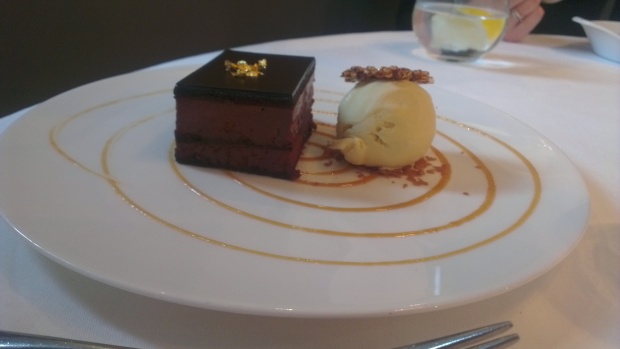 A lunch menu at Medlar will set you back £30 for three courses. To me this seemed a fair value for what was on offer, especially in this area where you are unlikely to sit down to three courses for a lot less. The meal was executed well throughout but, starters aside, lacked any wow factor. Having had other lunch menu’s too an amuse bouche would have set the experience off with those little extras making a big difference. I wouldn’t call it a destination restaurant but if you’re at all local, go, you’ve got 7 options to get through…

← Kayal – Indian – Nottingham
The Nottingham roast with the most →