In the peripheral vision of the indomitable Brian Clough sits the latest restaurant to hit Nottingham city centre. I find it difficult to succinctly describe Bill’s, whilst in part down to my lexicon and tendency for the verbose, I am not sure if Bill’s knows what it is. On entrance you are greeted by a series of conserves and confectionary, understandable at Carluccio’s or Jamie’s with their brand pull but not what I expected here. The dining area is kitted out with exposed brickwork with numerous brushed steel vents and pipes and tables are deliberately quaint and ramshackle. I had seen from some twitter PR that they do cocktails, but with only 6 options it’s hardly a well-stocked bar. So it must be a restaurant right? 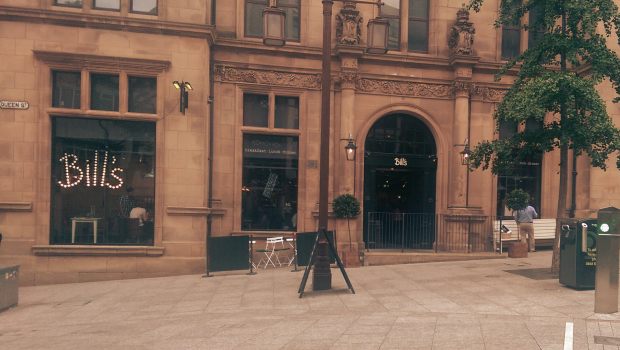 Staff were numerous and keen. The restaurant had only opened the week before so whilst you can’t expect it to run like clockwork I was a little concerned to have to take matters into my own hands to secure a menu each. It would appear a significant amount of their training had been devoted to up selling as extras were pushed throughout the meal.

The menu is modern European and if I had to be pushed to describe Bill’s I would suggest “a urban Browns”. Starters are £5/6, and whilst modestly priced my halloumi failed to impress. Perfectly edible but paired with lifeless; under seasoned cous cous and plain yogurt it was bland on a plate.

I had higher hopes for the main course. Burgers are £10 (inc. Fries) with steaks up to £18.50. I rallied against seasonal eating having chosen a hearty duck pie with red cabbage, £12. Things started well, the pie was topped with mash folded with smoked cheddar, as tasty a pie topping as I have ever had. What lay beneath was chunks of duck leg with a good gamey flavour as one would expect. Sadly that is as far as the success went. The menu had promised “rich gravy”, in reality the Sahara, open-lidded, duck pie would have delivered more moisture than Bill’s.

Inside my Duck Pie

Following my trial in the desert, I feared for trial by dessert. I had been eyeing warm pecan pie since I saw the menu online so I decide to make the plunge. A choice well made as this was comfortably the best course of the evening. The syrupy filling was just the right amount to keep the pie moist, the pastry had been well made and the banana ice cream worked well. 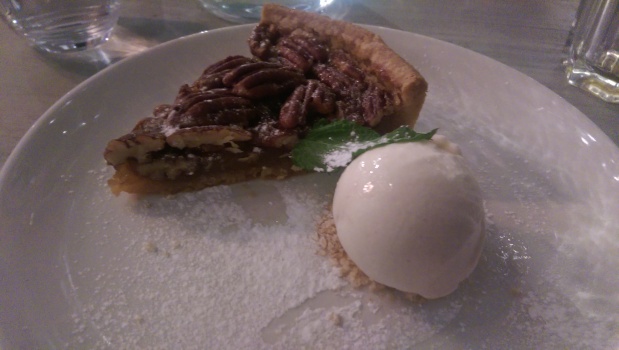 Whilst dessert was excellent it wasn’t quite enough to save the rest of the meal. The menu was promising and there is a little more encouragement with Bill’s than recent visits to Browns. Pecan pie aside though, I won’t be rushing back. If I want a burger or steak I’ll visit Annie’s or Larder on Goosegate respectively which are at the same price point. I don’t see what Bill’s brings to Nottingham that we don’t already have.