In the tradition of Nottingham’s grand attractive buildings becoming emporiums of food and drink, Purecraft follows in the footsteps of Pitcher & Piano and Tropeiro. It inhabits a modest but grand old bank, set slightly above street level on St Peters gate. The singular space of the bar/restaurant is dominated by pale wood and its large windows look out onto St Peter’s church.

Their own brewery and crafted beer may get top billing but it also wants to be known for “beautiful food”. Their menu is short, which is a good start. There are small dishes and bar snacks that would appeal had we not have been overcome with hunger. That said I baulked a little at their main meals, a burger (albeit with fries and slaw) came in at £15, fish (no mention of which) and chips at £14 and lamb shoulder at £16. It might not be breaking the bank but was more than I was expecting at such a venue, and with lots of other new openings in Nottingham I thought it would be worth saving a few £££s.

A Reuben sandwich was the successful recipient of my custom at a more modest £8. A pretty impressive tower of salt beef and rye bread arrived with pleasingly bright carrot and onion that had been pickled. The salad was pleasingly vibrant too alongside a little glass of very nice Longhorn IPA. The sandwich itself was a little on the greasy side but a good flavour of Swiss cheese and good beef. 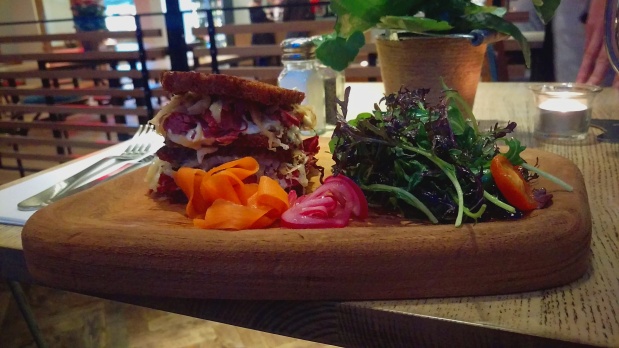 A sticky toffee pudding caught the eye for dessert at a tempting £5. Its sheen when it arrived was promising, as sweet and tacky as you would want. The sponge was also well executed but missed the traditional little bit of date through it to break up the sugary hit and provide an added texture.

I quite enjoyed the Purecraft experience, but struggled to see how their offering would proliferate the competition. The people who will go to have a nice beer mostly won’t want to spend £20 on their beef short rib. The people who want to spend £20 on a main course are unlikely to come here in the first place. Why would you visit Purecraft for expensive fish and chips over George’s? Why would you have a more expensive burger than Oak’s or Annie’s? I’m afraid I can’t see why you would.

One thought on “Purecraft – British – Nottingham”