There is always something enjoyable about trying somewhere new. Especially somewhere on a whim, especially somewhere that is unfamiliar. That’s the feeling I got this weekend when I went to check out Monga, not only had they only just opened but I was also about to get my first taste of Taiwanese food. Monga’s small outlet is in the Victoria Centre, between the Street Food Club and Ed’s Diner. There are a handful of little tables around the counter service area but you can chose to takeaway. What seating and facilities there are are functional rather than comfortable. The menu doesn’t extend to a huge number of options and focuses firmly on chicken. The main items are “fillets” but also popcorn chicken and a couple of sides available.The flavours available range from some fairly plain batter to teriyaki and even one topped with mozzarella. For an unspecified amount of time they are offering some free popcorn chicken (£5.50) when you buy a fillet (£7.50).

I decided to take advantage of said deal and went for the “Hot Chick” alongside Taiwan Popcorn chicken. The first thing to note is that their fillets are a serious chunk of chicken. I was impressed with the cooking, very crispy batter and extremely moist inside. The flavouring was good, a little fiery but given the thickness of the chicken you didn’t get a consistent amount of it across mouthfuls. I will say its a bit of a bugger to eat. It arrives in a little bag you grasp without getting your hands dirty but towards the end you get to the bone so need to get a bit more stuck in. The popcorn chicken was a much more subtle flavour, perhaps just salt and pepper in the batter although I detected something else in the seasoning to give it an extra dimension. It too was really well cooked if a little less crispy than the fillet. Misguidedly I also got some chips, far too much food but I managed to try a couple for science. Similarly to the popcorn chicken I couldn’t put my finger on their “signature” seasoning. It was a touch like nori but very subtle. Good flavour and nicely fried. 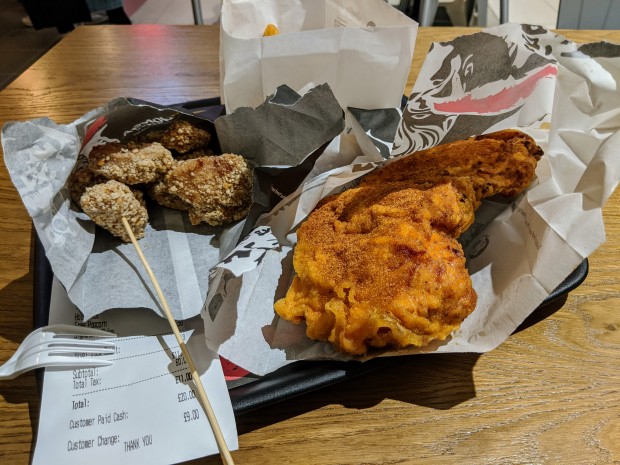 I couldn’t greatly fault anything I ate at Monga. That said I don’t have too much to compare it too. It’s not as outrageously crispy as Korean chicken from the likes of The Gallus but the chicken itself was certainly amongst the best cooked fried chicken I’ve had. A slight criticism is that it seems a touch pricey, a fillet with side and drink is almost £11, and service a little slow although it is their first week so things may improve. With both of those things in mind they might struggle to attract to attract a lunchtime work crowd. That said I can certainly imagine a time when I think “do you know what I fancy….”, there’s nowhere else like it.