Another upgrade for Ibercio, having basically eaten everywhere in Nottingham now I would put them third behind Sat Bains and Alchemilla. Some of the dishes I have eaten have been at Michelin star level.

I have upgraded Iberico’s score based on a number of strong subsequent meals since my initial review. The lunch menu here has been increased to £12.95 and an evening ‘Express’ menu at £14.95, both still represent great value. The consistent level of cooking and strong flavour combinations puts this restaurant comfortably amongst the best in Nottingham.

The little brother of World Service has had no shortage of local plaudits, but has also received wider recognition. The restaurant recently won a coveted Bib Gourmand from Michelin,  an award defined as; “Inspectors’ Favourites for Good Value”.  I have been several times over the last few years and following this accolade I thought it was time to revisit. Iberico sits in the Galleries of Justice and whilst it is underground the restaurant maintains a lightness and is a truly pleasant space to dine in. Having said that because it is subterranean when it is busy noise can quickly be amplified. The good value in Michelin’s criteria is likely to refer to their value popular lunch offer which I most recently indulged in. 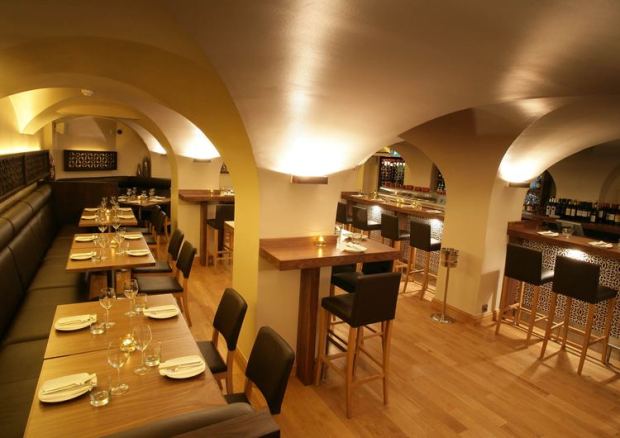 The “Express Lunch” offer is £11.95 for Catalan bread, 2 tapas dishes and a dessert. One of the things I look forward to most when returning to Iberico is the bread. A lovely garlic, tomato and herb hit sits atop the perfectly toasted but light bread. Options to chose from for the 2 tapas dishes do not stretch to the full menu but are plentiful, they number around a dozen with seafood, meat and vegetarian dishes always included. Our first choice arrived (dishes come out in regular intervals as they are ready) which was celeriac, spring onion & sweetcorn fritters. The fritters at first glance seemed well cooked but on closer inspection were quite oily with the subtle flavours of the vegetables getting lost, a disappointing start. Unfortunately that was followed by another poor dish, this time let down by confused flavour combinations rather than execution. Sobrassada, a sausage akin to chorizo, was cooked in puff pastry with a truffle honey sauce/glaze. The cooking of the pastry was skilful as it arrived light and crispy, sadly the whole dish was overpowered by effectively being drowned in honey where I couldn’t decent the presence of any truffle at all.

Things improved markedly with the next two dishes; lamb belly was attractively presented which often helps. The lamb was well cooked with the tomato and  puree cutting through the rich, fattiness of the belly nicely. A pair of roast onions looked good too, a little more dressing would have been appreciated however flavour was there especially with a few choice fragments of blue cheese. If I were talking in clichés, I’d certainly say it was a meal of two halves. 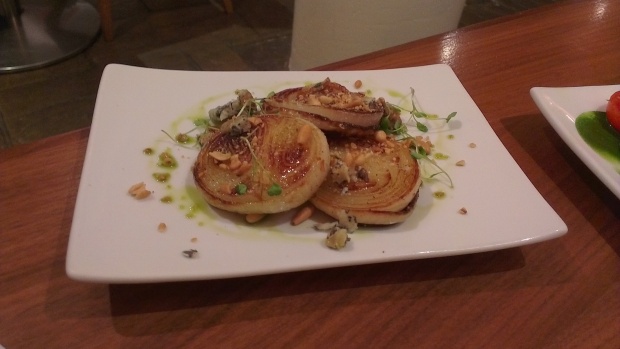 Dessert options were threefold, of which we had two between us. I picked an old favourite, churros, which brings back memories of Spanish holidays and buying these from street vendors. Churros are long doughnuts served, most often, with hot dipping chocolate. I always enjoy the churros  at Iberico and today was no exception, however since my last visit they have included a £2 supplement for them on the lunch menu, quite frankly a little cheeky for a couple of doughnuts and some melted chocolate. M’hanncha was a more technical dessert, essentially a little almond pastry with a great, light almond ice cream and some marinated cherries to add a kick of freshness and flavour.

This quite clearly wasn’t my best experience at this restaurant but still displayed some accomplished cooking. It also represents one of the best lunches and at fantastic value, despite the disappointments I will certainty be visiting again. The menu also changes (thankfully given the current dishes) on a regular basis which is good to see and encourages a repeat visit. There is nothing else in Nottingham which matches up.

It is also worth noting that Iberico has just acquired a new site in Derby on Bold Lane. It will be interesting to see the response on opening the new branch, I hope and expect it will not dilute the quality of cooking that it currently services Nottingham with.