As I write it’s just over a week since Red’s opened, but I get the feeling I’ve already missed the boat a bit. Seemingly half of Nottingham have already been, including Sarah who gave her view of the press launch last week.

I headed down with a few friends to get my BBQ fill the midweek after their opening weekend. The raw gutted decor suits the place and has its quirky features, a dilapidated fridge the subject of much debate at our table. The wider religious shtick didn’t irk me as much as I thought, given the heavy marketing it was pleasingly conspicuous by its absence in the restaurant. The menu though was cause for grumble, small, cluttered and frustrating to navigate. Managing to collect our thoughts myself and a friend decided on a number of meats and sides to share. 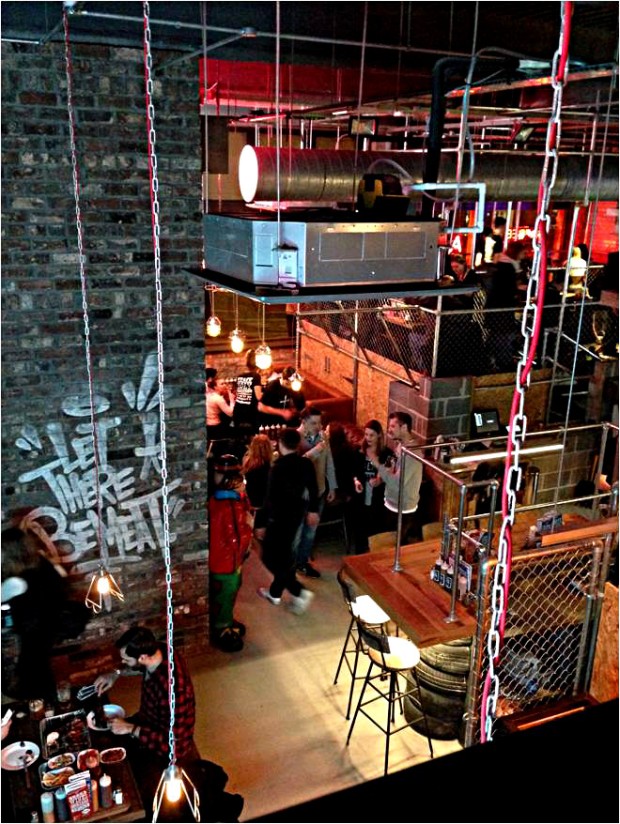 Red’s Nottingham from the mezzanine

We had been quoted a 20 minute wait but all arrived at a brisk pace. The standout of the evening were the burnt ends. Charred, smoky, sticky chunks of beef that glistened even in the low lightening of the restaurant. A mound of pulled pork was topped with a few shards of crackling which was a nice touch, although they required some serious crunching. The piggy pile itself had that classic sweet BBQ flavour though there was a little too much fat and as a direct comparison it didn’t eclipse the effort of the competition at Rub. The final component of the meat triumvirate was brisket, enthusiastically described as being the premium USDA graded beef. In parts the result was excellent, where the cooking had blackened the beef’s edges the flavour was deep and intense. Sadly this couldn’t be said throughout as the majority of the meat was a little lifeless. USDA beef is all very well (though my experience at Missoula might say otherwise) as a premium beef but for a slow-cooked BBQ dish I really don’t see what it brings.

As my main side I’d ordered beans hoping they’d provide some respite from the unrelenting meat. Maybe if I’d been paying attention I might have noticed that they actually contained brisket, pulled pork and burnt ends! Had I not got a plateful of all of those things these beans would have been pretty damn good. One of the biggest disappointments were the fries, I had no real point of reference but expected them to be better. They lacked the crisp texture of the best of their kind and an extra 25p to ‘fire them up’ added precious little.

I almost pushed myself to try a dessert, however the only one which inspired me was off the menu which was disappointing. To this point I have mentioned any prices and I was pretty pleased with that I got for my money at Reds. All of the above, + a beer came to £20. Whilst not cheap the food was really more than a man should be eating. A friend’s doughnut burger verdict was that it didn’t compare favourably to a Rub waffle burger, though Rub’s sweet-bunned incarnation did come in at £5/6 more expensive.  There were some frustrations on the evening with drinks and food that weren’t available, a dropped onion ring and a wrong drink. That aside the team had been well drilled and service was pretty good.

Having eaten at Nottingham’s three new American barbeque joints; Red’s, Rub and Jim’s I can tell you there isn’t actually that much between them. Red’s and Rub have a similar Man vs Food feel, with Jim’s a little more of a traditional smokehouse in style. Each in my experience have had some missed steps, I’m sure I’ll revisit to see if they have smooth these things out. If I had to pick one to go to tomorrow? Red’s would edge it with their burnt ends.