MOD is an American-owned pizza specialist that describes itself as a “fast-casual” restaurant. I assume that means its fast food but they don’t want that tag associated with the likes of McDonalds. They have over 150 sites in total but Nottingham is only their 5th in the UK and hits some of the best footfall in the city alongside Five Guys on Market Square. It’s a bit more comfortably decked out than its concrete competitor, Inferno, but still recognisable as a fast food casual restaurant.

At this point I should probably focus on the food and options but I will dive right in to one of the worst dining experiences of the year. The queue to build your pizza at the Subway style counters was already on the go-slow, after about 20 minutes we were seated and waiting for our names to be shouted out. My pizza arrived after 10 (I’ll tell you about that later) and 5 minutes after I went up to collect my girlfriends. On returning to the table it was the wrong pizza, I went to check and they seemed to have no answers until someone from another table came back with a similar problem. They had mixed up our order with that of another table. We couldn’t swap as the other patrons had started their pizza before realising the mistake. They handled it well, said they would take a list of the toppings and get it straight back in the oven. 15 minutes later the name was shouted again and I returned, hopefully triumphantly, to an unhappy girlfriend… disappointingly several toppings were missing (namely chicken, chorizo and broccoli). At this point we decided to cut our losses and eat it anyway. I also observed that another table had finished but 1 of their party hadn’t got a pizza, upon enquiring it was seemingly lost with no explanation. For this shambles I did receive 2 vouchers for free pizzas which, if anything, is an indication of just how bad it was. It might be their first week and they might have been busy but it should be a simple production line without these sorts of errors. 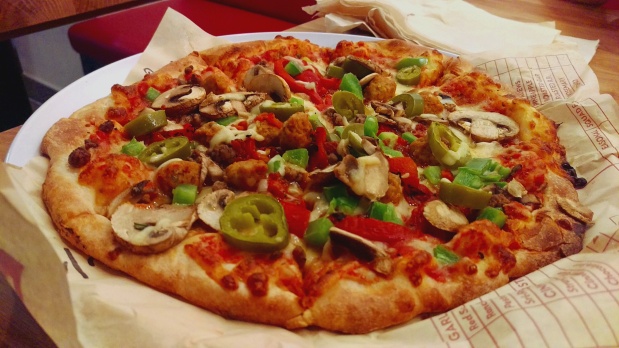 Let me give you some positives. The pizza was alright, a good base certainly helps but it could have been thinner. The ingredients were of mixed quality and you do get a good amount. That said it all ended up looking like something I’d through together at home. It ended up tasting like a slightly better version of something you’d get at Pizza Hunt. The best aspect is probably the value, £7.47 means it comes it at £1 cheaper than Inferno. They also have Punk IPA on tap which gains them a brownie point from me.

The good things that do exist about MOD were overshadowed by the shambles of the experience. Even without this I wouldn’t compare them favourably to their main competitor, Inferno, who’s pizzas look and taste better. Both pale in comparison to the best in town which is still Oscar and Rosie’s. I’ll be back though, only because I’ve got 2 free pizzas to eat!

← A weekend in Vienna
Nottingham’s Restaurants of 2016 →

One thought on “MOD – Pizza – Nottingham”