Singh’s – Good, but trying a little too hard

The culinary landscape for Indian restaurants in Nottingham is crowded. There are a number of strong establishments in the city centre with varying strengths and price points. As I walked to the entrance for dinner at Singh’s my first thought is that they aren’t helping themselves in this saturated market. The first thing you notice is a large, garish board outside advertising a cut price lunch deal, it doesn’t fill me with confidence.

Inside it is a mixture of some nice features, the bar & open kitchen and some traditional Indian paraphernalia. But it is let down by additions of plastic table numbers and the rather 70’s presentation of cheap napkins ruffled in your glass on arrival.

The menu includes all the classics but a good number of other dishes in their ‘Treasures’ collection. Mains are priced at around £10 for the most part. One oversight for me with the menu was a clear spicing scale; I don’t like to play a lottery with chillies.

To start we had a vegetarian combo which was an interesting selection including reasonable examples of grilled vegetables, paneer and some samosas. Other elements were better than the norm with a really top bhaji, good deep-fried paneer which managed not to be greasy and some spiced mushrooms. This was all served with a fiery dipping sauce which complimented the elements well.

Our next course arrived in good time, I had ordered Dhaba Murghi chicken with a thick onion based sauce. The chicken was well cooked and the dish had the right level of heat with the sweetness from the onions lifting it, an accomplished curry. A friend had Rajastani Ghost which, whilst slightly miserly on the lamb front, was again good although the sauce was slightly thin in comparison to mine. We also shared a (plentiful) pilau rice and a Peshwari naan with sweetness which wasn’t over the top as it often can be.

Despite the abundance of food so far and, against our better judgement, we chose to sample desserts. A traditional Kulfi and pineapple icecream (both £4.50) were little more than ordinary but pleasant enough. 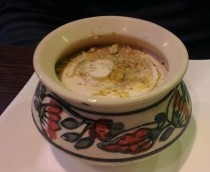 Now I haven’t yet touched on the service, which was attentive to the point of ridiculous. When we arrived there were 3 other tables (it was early) but there were as many waiters as patrons. What then transpired was a procession of being asked if everything was ok every 10 minutes (literally) and it somehow seemed to be a different member of staff every time?! When I did ask a question, a recommendation for a dessert, there wasn’t any information forthcoming. They even took to accosting customers after a few seconds of looking at their outside menus. There was a lot to like about Singh’s with my main course and the starter combo both very good and different. The pricing is maybe a touch high, although of course there is that cut price lunch…

8 thoughts on “Singh’s – Good, but trying a little too hard”